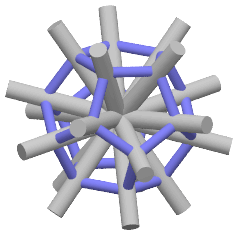 cluster and the shape will always be the 3D * asterisk (axis of dodecahedron).

9 balloons would be too loose and 11 will not fit.
10 is the perfect number and it is also the axis of the dodecahedron.
10 balloons attached at their centers create 20 radii.
That is full length thin balloons.
There are also round balloons and everyone has probably seen a balloon cluster (for instance) in a car dealership? 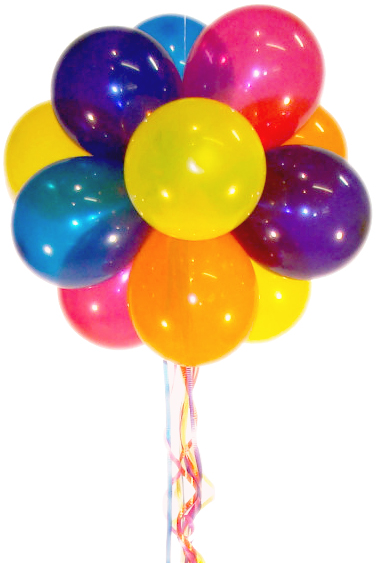 There will always be 12 balloons if they pull the knotted ends into a common center.

That is exactly how many fit. It is the same as the faces of the dodecahedron.
Notice where the balloons always touch in groups of three? There are twenty spots like that. If you stuck drinking straws or pencils into all twenty spots all the way into the center... that is how the arrangement of threads form in the 3D asterisk. Just like the other thin balloon package.

Note: No one is shooting for those shapes when they tie balloons together.
Everyone comes up with the same shape because 12 round balloons or 10 thin balloons is how many fit together like that.
It's automatic shapes.

Automatic shapes happen. It is the way everything happened.
So the point is... threads can form the automatic shapes that then in turn form everything else. If they (the threads) are made from something smaller that automatic formation ability goes pooof right out the window.

The Universe and everything in it had to form automatically by itself (it doesn't have a formation instruction manual).

You can use anything as an example: for instance -- electrons. They are supposedly being held in place in their orbits by protons (actually quarks) shooting (say 'exchanging' (if you like)) photons at them.
How could they possibly know what direction to shoot the photons?

Check out Gold -- 79 electrons...
The electrons are supposedly orbiting so the actual quark(s) (there would be 79 quarks shooting at 79 electrons) that is doing the shooting for whatever electron must be constantly changing as the electron goes round the nucleus.

And the quarks that are supposedly holding electrons in place by shooting photons at them are the same quarks are also shooting gluons at other quarks.

Get a good picture of everything that (they say) must be happening inside of an atom and you will realize it absolutely cannot be happening like that, what you are led to believe is actually bonkers.
The basic fundamental stuff cannot do advanced mechanical interactions, everything has to be automatic.

Gravity is also very simple -- impossible to be complex -- at the smallest level everything has to be simple and automatic.