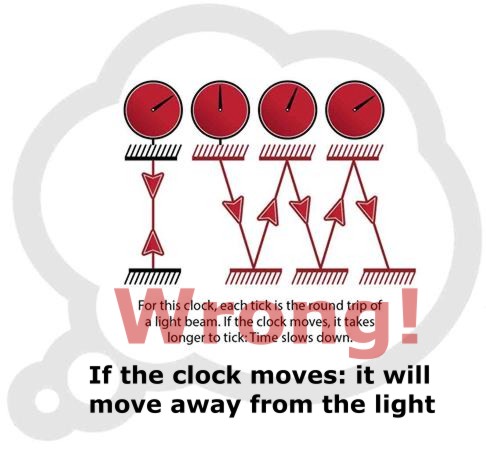 "For this clock, each tick is the round trip of a light beam.
If the clock moves, it takes longer to tick: Time slows down." -- Wrong

If you shine a beam of light at a target on the Moon - by the time the light reaches the Moon the target will have moved away from the path of the light.

Nothing dilated. Nothing happened to time.

The light beam is NOT going to automatically find the target. The only way for the light beam to hit a steadily moving target is to angle the beam - and that of course is the only thing that lengthens the path.

REPEAT: Nothing dilated. Nothing happened to time.

Walk with flashlight: speed of light is c + walk speed.
Reason: Time dilated (slowed) because you are walking?
So you measure light at c?

If you had a unbelievably high powered telescope and looked at the person shining the flashlight in Andromeda would you measure the speed of light as c + AGS?
No, because you are in the milky way and all light has traveled all the way to you and that means it is traveling at milky way speed.
You would definitely see red shift or blue shift though.

~~~~~~~~~~~
Frame dragging?
~~~~~~~~~~~
Yes, and the stuff that is being dragged is the quantum thread network.
It is actually gravity-centered; that is stronger than frame dragging.

Source of energy, gravity, all forces, light, you name it.

The threads unit itself would be just the grey threads in the picture (no color and a lot thinner of course).
It would fit perfectly inside of a dodecahedron.
Actual thread length is about one Ångström and it is fine enough where 10 threads (20 radii) could curl-up into the size of a neutron.