The quantum thread group itself would be just the grey threads (or strings) in the picture (no color and a lot thinner of course).
It would fit perfectly inside of a dodecahedron.
Actual thread (or string) length is about one Ångström and it is fine enough where 10 threads (20 radii) could curl-up into the size of a neutron.
GRAVITY, LIGHT, ENERGY, TIME, COLOR, HEAT, LIFE, SPACE -

~~~~~~~~~~~~~~~~~~~
EVERYTHING IS EMERGENT
~~~~~~~~~~~~~~~~~~~
Space is NOT empty. There is an all encompassing lattice-type thread network in space. It is gravity centered - Einstein called it Space-Time. Otherwise known as the Fabric of Space. (yes, the fabric of space must actually be made from something)
A good 2-D model would be something like a spiders web made of the finest web-silk-thread filament. Now imagine a 3-D web.
It is made from individual yet connected threads and of course the web has tension on it (that's where gravity gets its pull).
Everything is a simple emergent property of the thread network.
NOTE: Empty Space actually is empty. But since there is an all-encompassing thread network in what humans refer to as "space" - it is not empty.
Here is the way Everything works...

LIGHT: Visible light is a specific vibration traveling in the thread network.
Is anything actually shining or bright?
No, it is just vibrations from a specific section of the spectrum that humans can see.
If you could zoom in on an atom and try to find what is actually giving off the "light" you would NOT find "light" - there would only be vibrating threads (something like this is true regardless of the theory) . 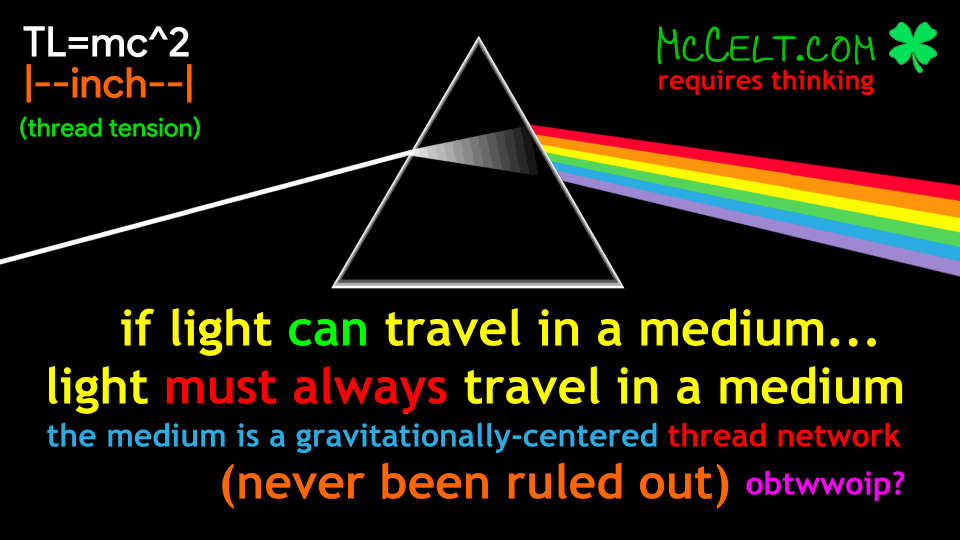 COLOR: Color is just the frequency something is vibrating.
There isn't anything that actually has color.
The frequency of vibrations determines its perceived color:

and between these (in the range 4 - 8×10^14 Hz) are all the other colors of the rainbow.
If you "see" something red... you are actually only seeing 4×10^14 Hz.
And, of course, if you see something red: that means it is absorbing all other frequencies and reflecting or emitting red.

THE SPEED OF LIGHT: The speed vibrations travel through the network is the speed of light

Here is a regular thread tension formula...
Tension = velocity squared x mass / Length
If we plug in c and rearrange we get the one-inch formula...

Now we know where energy comes from and why light travels at c.

HEAT: Heat is the amount of vibrations traveling through the thread network.
The Sun is unbelievably hot - why don't the proton, neutron and electron threads melt from the intense heat?
Heat is only the amount of vibrations happening at any given moment. The basic substance everything is made from is inert and has NO temperature.
An easy analogy is a guitar string:
● If it were vibrating quickly the vibrations would be measured as heat.
● If there were no vibrations it would be measured as absolute zero.
The string itself did not change temperature and has no temperature.
A quantum dump truck load of non-vibrating guitar strings would be like The Bose-Einstein condensate - they would not be vibrating so the temperature would be measured as (close to) absolute zero. But the lump of strings is NOT frozen solid - the strings have no temperature - you could dump / pour the strings out of the dump truck if you wanted to.

ENERGY: Radiant Energy is vibrations traveling through the thread network.
Other types of energy are vibrations or movement.
You cannot have energy without a mass, energy is mass vibrating.
Energy cannot be out on its own. (a supposed mass-less particle is a particle nonetheless, but there are no mass-less particles, so that's irrelevant)

Think of a guitar string. If you pluck it... that is the energy.
If you remove the guitar string from the scenario... can you still have the energy? No, of course not.

Can you convert the guitar string vibration into mass? No... that is ridiculous.


Tension is a Force. Gravity is a Force. A Newton is a Unit of Force.
Velocity is a vector but the dimensions are the same as speed = [L]/[T]
The words like "speed" are only names of what the dimensions on the right are called.
You cannot have anything like pure length, force or energy. (Pure mass? Yes, that is OK?)

Tesla was correct...
"There is no energy in matter other than that received from the environment." – Nikola Tesla

SPACE: Empty Space would be literally zero, null, zilch, nada, empty void nichts but since there is an all encompassing thread network in it - it is NOT empty.
NOTE: Empty space would NOT have any heat, vibrations, energy or anything else in it.

The threads are connected - that creates the network. The network has tension on it so vibrations can easily travel through it on the threads. Any masses ●● in the network will have a higher tension between them and pull together - that's gravity.

TIME: Time is the speed things happen in the thread network.
If the thread network tension goes up... gravity goes up, and so does the speed of light and everything else with it.
That includes any type of measuring device, the speed your brain is working and time itself.
Increase or decrease tension and it changes everything along with it, that's all electro-magnetic phenomena, vibrations... everything.
It's like being a character in a movie and you don't know the speed the projector is running... fast, slow, stop, start... you don't know.

I'm talking about something completely independent from everything.

Like H. George Wells sitting in the time machine. 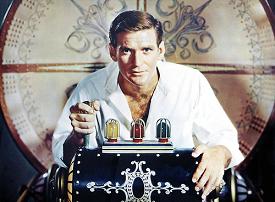 Anything Einstein said or proved is completely irrelevant to George.
George can see things happening at all kinds of different speeds... and everyone else is completely unaware of it.
The same thing can be happening without a time machine.

There is no way to know the speed things are really happening.
If everything is happening very slowly so is the way the brain sees it.

● "Thread Network Time" would be people in the movie. They can't tell what speed the movie is running because they are actually in the movie - they are made from movie film.
Space has the thread network in it (that is what Einstein calls spacetime).
The speed of light is the speed vibrations traverse the thread network, and it is of course the speed everything works - including people.
"Thread Network Time" is the speed we perceive things. It is completely emergent.

Tension = velocity squared x mass / Length
If we plug in c and rearrange we get the one-inch formula...

If the tension changes: so does the speed of light. A speed is a length divided by time. And in this case the speed is very important because the speed of light is the rate at which time passes and everything in the Universe works - including you.
Everything is emergent. If you can grasp an idea like "heat" is just vibrations - nothing is actually hot - then it is easy understand that time (as we know it) is just the speed of the vibrations.


MATTER: "Matter" is just balled-up / clumped up parts of the same thread network.

DARK MATTER: Dark Matter is the thread network itself. It is the fundamental substance and the reason DM is invisible is because it conveys light.
It is completely filling space. The clumps around galaxies and other spots are excessive amounts.

DARK ENERGY: Dark Energy is tension on the network as a whole. Everything is being pulled on equally. Any masses in the system create a higher tension pull between them - that's gravity 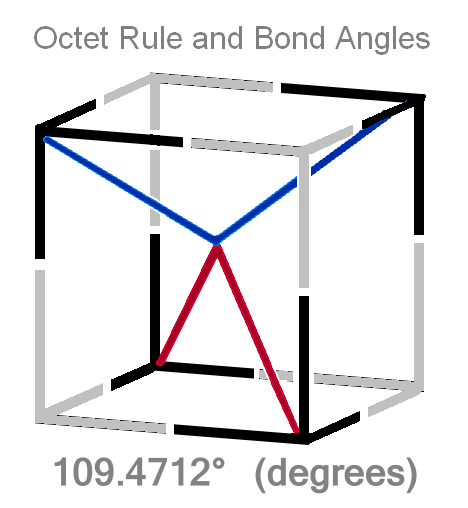 LIFE: Everything in the Universe must be made from the same basic type stuff. (particles or threads)
Stuff can only work and form automatically - the Universe does not have an instruction manual to use on itself.

Rule #1: There cannot be any rules.

Everything is geometric - that is easy to see from all the crystalline structures of the periodic table.

The basic stuff automatically combines with other stuff based on what is possible or not possible. i.e. if the key fits in the lock it combines.

Octet Rule: Everyone knows it, and it is valid.
But it is NOT actually a rule. It is just the way electrons combine automatically.
Reason: a cube has 8 corners
Atoms are cubotic. That is how / why crystals form.

If an atom is missing an electron in its outer shell it can easily combine with an atom that has an extra electron in outer shell
This process must be happening everywhere in the Universe and it is the way basic molecules are formed. Given enough time and random combinations - it is the way a basic DNA molecules could form and life could start.
It is not like monkeys on a typewriter typing Shakespeare - it would be more like monkeys on a typewriter with only 4 keys [G][C][A][T] a big chunk of randomness gets eliminated.
And since there are base pairing rules: [G] with [C], and [A] with [T], another big chunk of randomness gets eliminated.

So, I agree with Ridley and think there is an abundance of life in the Universe. It is an emergent property along with everything else... 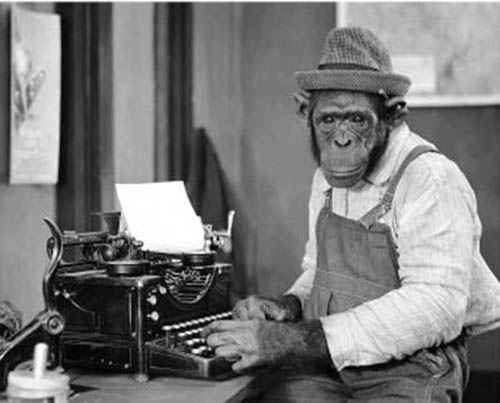 The monkey code you see above was randomly generated by your computer.
If you refresh this page you will get a completely different replacement DNA code.
Just by chance you might get the correct code that was the basis and starting point for all life as we know it. You never know what you're gonna get.
Life is like a box of chocolate, but it could also be typed by a monkey.

Think about it for 20 years if you have to.
Here is a link to the whole theory...
http://www.mccelt.com/the-one-inch-equation-to-explain-all-physical-laws.php
...