THE GENIUS OF MICHELSON-MORLEY, NOT!

The medium is actually a lattice-type string particle field.
(not the string theory type)

The field from the Sun encompasses the solar system (plus more) and the field moves with the Sun.
The Sun (and solar system field) are also moving at high orbital speed around the galactic centre.
If you had to pick a fixed position for a supposed stationary field (or medium), that would be a better choice... but not the best because the Milky Way Galaxy is also moving through the Universe.
Claiming a fixed field would be relative solely to the Earth's orbit is not only wrong in more ways than one... it is complete baboonery.

The Earth has of course the same field but smaller and it is inside the Suns field.
The Earths field is moving with the Earth. You have a field surrounding you.

MM tested for a Stationary Ether... They thought the Earth was rushing through it at an enormous speed... how could that work if you are inside a closed building or underground in a cave?

Do little sections of the stationary field (that the Earth is supposedly rushing through) get cut off and remain in place behind closed doors? That would mean the field is being dragged. So it is not stationary.

The only way for a stationary Ether to work is if it could penetrate all matter. But then that would mean the light that is using this stationary field would also penetrate everything. Get it? If that were the case you would not be able to see matter because light would go right through it.
1) If light could pass through things completely unfettered... everything would be completely invisible.
2) If light can pass right through something but you could still tell that something was there it would look like glass or clear ice. 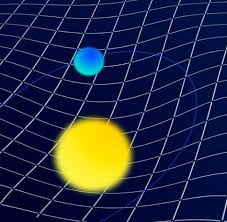 GP-B just tested for Space-Time... Yes... It is there. What is space-time? it is this same particle field of strings explained in this theory.

Is the field it creates curved? Yes, but only because the mass it surrounds is spherical. You can think of it like an atmosphere. Any light passing through a curved field will of course obviously curve (gravitational lensing) or deflect.

The field is responsible for the conveyance of light, electromagnetism, gravity, dark energy, mass and everything else.
Everything is made from the same thing, the string particles.
The particles and the fields they create are all there is, it is everything.

I wonder what's going on? Everyone believes that MM experiment without question and they pass the information on through generation after generation. It is actually bringing modern physics to a standstill.

If you were going to test if there is a medium for the conveyance of light, would you...

Here is your chance to agree with those great men and pick "A", everything you think you know is based on that.

NOTE: Newton thought there was a medium for the conveyance of light. He called it the finest Ether. He also thought it was responsible for gravity and a few other things. That is absolutely correct.
If you were going to test for gravity would you test if the Earth is rushing through gravity? Yes! if you are an imbecile!

Tesla was also correct...
"There is no energy in matter other than that received from the environment." – Nikola Tesla
That is absolutely correct.

Einstein also thought there was an Ether / medium (but he renamed it Space-Time to keep everyone happy).

"Recapitulating, we may say that according to the general theory of relativity space is endowed with physical qualities; in this sense, therefore, there exists an ether. According to the general theory of relativity space without ether is unthinkable; for in such space there not only wonld be no propagation of light, but also no possibility of existence for standards of space and time (measuring-rods and clocks), nor therefore any space-time intervals in the physical sense. But this ether may not be thought of as endowed with the quality characteristic of ponderable inedia, as consisting of parts which may be tracked through time. The idea of motion may not be applied to it." -- Albert Einstein

If you were going to test for Space-Time would you test if the Earth is rushing through Space-Time? No! You would do an experiment like GP-B and test if Space-Time is being dragged -- that is absolutely correct.
And now, thanks to LIGO we know Space-Time can be stretched -- that means Space-Time must be something.

● Space-time is a lattice type string particle field in space.
● Empty space is completely empty / null / void. There is a big difference.

Space-time must be made out of something.
Space-time is NOT empty space.

You can easily fold up, distort and curve Space-time, but you are NOT going to do anything to the empty space it resides in (actually, curving space-time would be doable but folding-up space-time would NOT be so easy -- think of air or water, etc.).

To sum it up: What Einstein calls "Space-time" is a lattice type string particle field in empty space (not the string theory type) .
The particle field is made from individual yet connected particles completely filling space.
The field is NOT fixed in space, it moves-along-with / is-held-in-place-by the largest mass in proximity.
It's something like the way gravity works (it's actually responsible for gravity), relative strength due to size and proximity.
It's all made from the same particles.

So, Yes -- there is medium and here is how it works...
http://www.mccelt.com/the-one-inch-equation-to-explain-all-physical-laws.php

There is an all encompassing lattice-type string particle field (not the string theory type) in space (and everywhere).
The field is made from individual yet connected particles and conforms to whatever shape it is surrounding. So light traveling through a curved field (like the Earth or Sun) will of course curve.

Is gravity curving the field? No! The field itself is what creates gravity (gravity is field tension).
Does this invalidate any of Einstein's equations? Of course not, it is just another way to look at it. Einstein has field equations and this is the field.

The particles are connected -- that creates a field. The field has tension on it so vibrations can easily travel through it on the strings .
That's what light is...

If we plug c in and rearrange we get...

Both sides of the equation are in joules or energy... equivalent to "E".
It means the Tension of the strings in space times their length is equal to their energy.

This is why the speed of light is involved in Einstein's mass energy equivalence equation...

...and actually why light travels at the speed of light...
I always wondered why... now I know.
It had to be something mechanical... tension and string lengths!

So, you can arrive at Einstein's famous formula from completely different directions.
You can think energy is contained in mass and released.

Or you can think there is a particle field of strings and mass is inert, the energy is only potential... released (actually pulled) by tension on the strings.

They are equivalent. Which is correct? You do not know.


Tesla was correct...
"There is no energy in matter other than that received from the environment." - Nikola Tesla

Michelson-Morley did NOT do that, they tested if the Earth was rushing through an Ether (medium), that is an erroneous constraint and a big mistake.

Then everyone completely loses all sensibility and accepts the experiment as valid.

That means (they think) light does not have a particle field it travels in and since it cannot be just a pure vibration or energy (since there are no such things) they have to invent a mass-less particle. That is compounding the mistake and it is 2 levels deep at the moment.

But everyone knows matter does have mass (some kind of substance).

But this supposed massless particle does not. So, to explain it they come up with an Higgs field that is completely filling space (in the same way an ether would) and that is what is giving mass only to certain particles. Now the mistake is 3 levels deep.

NOTE: The Higgs field would actually be a particle field. They think they found the Higgs by smashing protons together and getting the mass-energy?
That is guess work. I have something the weighs 2 grams, what is it?

So, what happened is they thought they eliminated the one particle field that explained how light travels (the ether, medium) and now to explain light they need at least 2 particle fields.

NOTE: Are Michelson and Morley imbeciles? No, everyone butchered Isaac Newton's idea so everyone at that time of the MMX would have thought the medium would be fixed in space. To set the record straight -- their experiment actually worked and proved the Earth is NOT rushing through a fixed medium. And that is correct -- the Earth is NOT rushing through it -- but in no way, shape, or form did they disprove the existance of a medium.